The goods shed at Camden was a unique building on the New South Wales railways. It was a pretty standard shed on a platform but also had a canopy which was almost a duplicate of the main shed.
I used the photo below to calculate the length of the shed and then based it on a plan I had for a 60 foot shed and used the same basic design for the canopy.
The platform is precast timber, back filled with earth.
The siding was used to store spare cars, shown in the photo below, as well as loading and unloading goods wagons. Because the CCA car used on the Camden line had a goods compartment it was probably loaded and unloaded in the shed also. 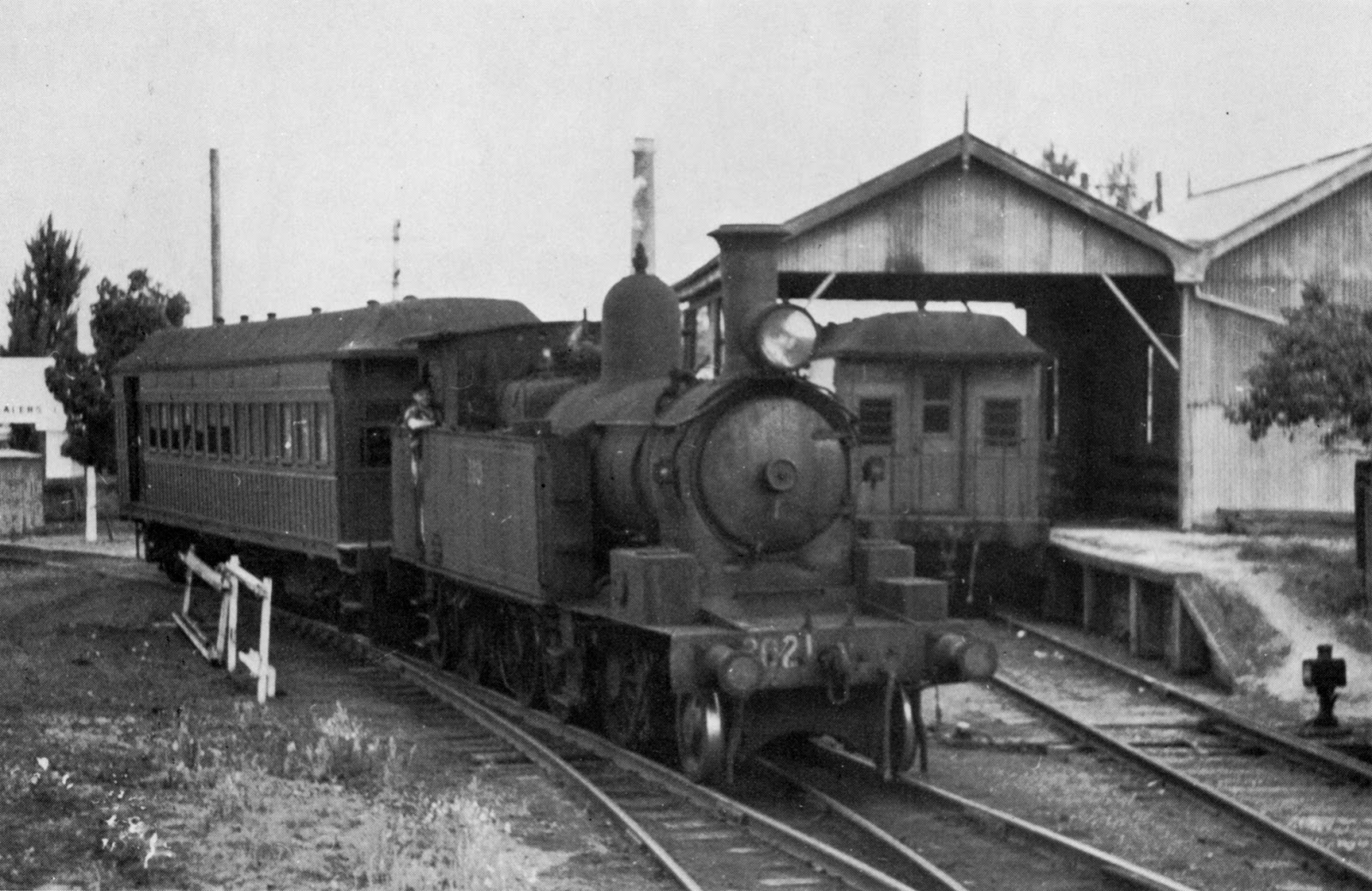 The above photo, from the book Pansy the Camden Tram by Ian Dunn and Robert Merchant, shows the spare CCA car standing under the canopy while tank locomotive 2021 arrives with another service from Campbelltown.

The photo below shows the completed model standing on the layout. some track ballsting has been done but no scenery is in place. The fettler's hut on the left is a Structorama model. 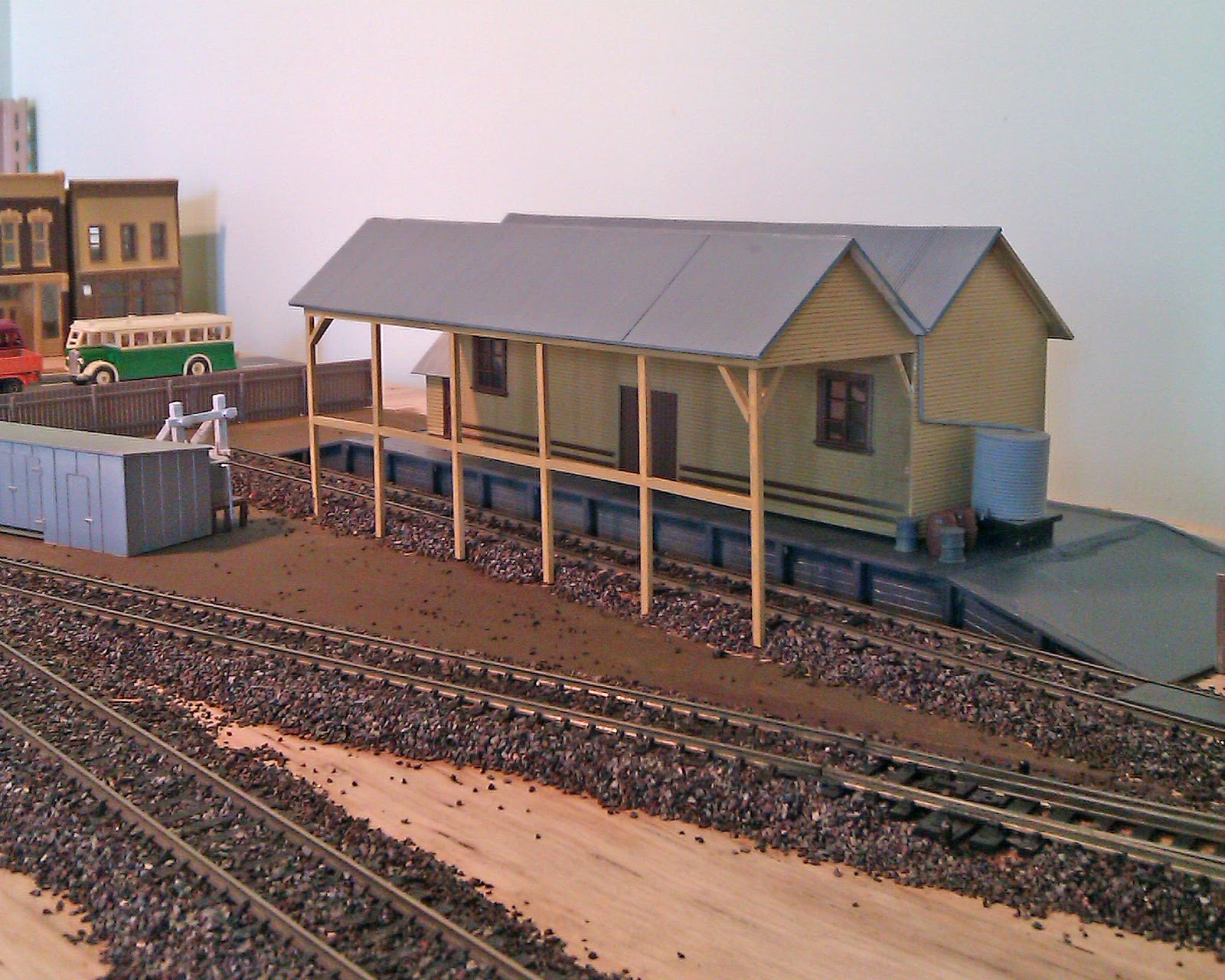 The model was built using styrene with Campbell's windows and doors and the water tank is an old Sentinel kit I have had for many years.
Posted by Unknown at 20:22 1 comment:


﻿﻿﻿﻿﻿﻿﻿﻿﻿﻿﻿﻿﻿﻿
﻿ ﻿ ﻿﻿﻿﻿﻿﻿﻿﻿﻿﻿﻿﻿﻿﻿ All of the buildings on the Camden Valley model railway were built from photos published in the books Pansy, the Camden Tram and Byways of Steam 21. Both these books provided many photos that allowed me to create the feeling of Camden in model form.
The station building measurements were calculated by working out the width of doors and walls in the photographs and using a plan book I picked up at a Liverpool exhibition some years ago.
I constructed the building from Evergreen clapboard sheet styrene and used Campbell's doors and windows. The roof is sheet corrugated iron.

The yard at Camden is a very simple layout with a platform road and run round, two goods sidings, a good shed on its on siding and the milk depot siding.
The plan below is wrong in that the run round is facing the wrong way and seems to duplicate a mistake on the original railway diagram. I have not seen any photos the confirm the track layout was as that shown on the diagram but all photos show the run round layout in the opposite way. 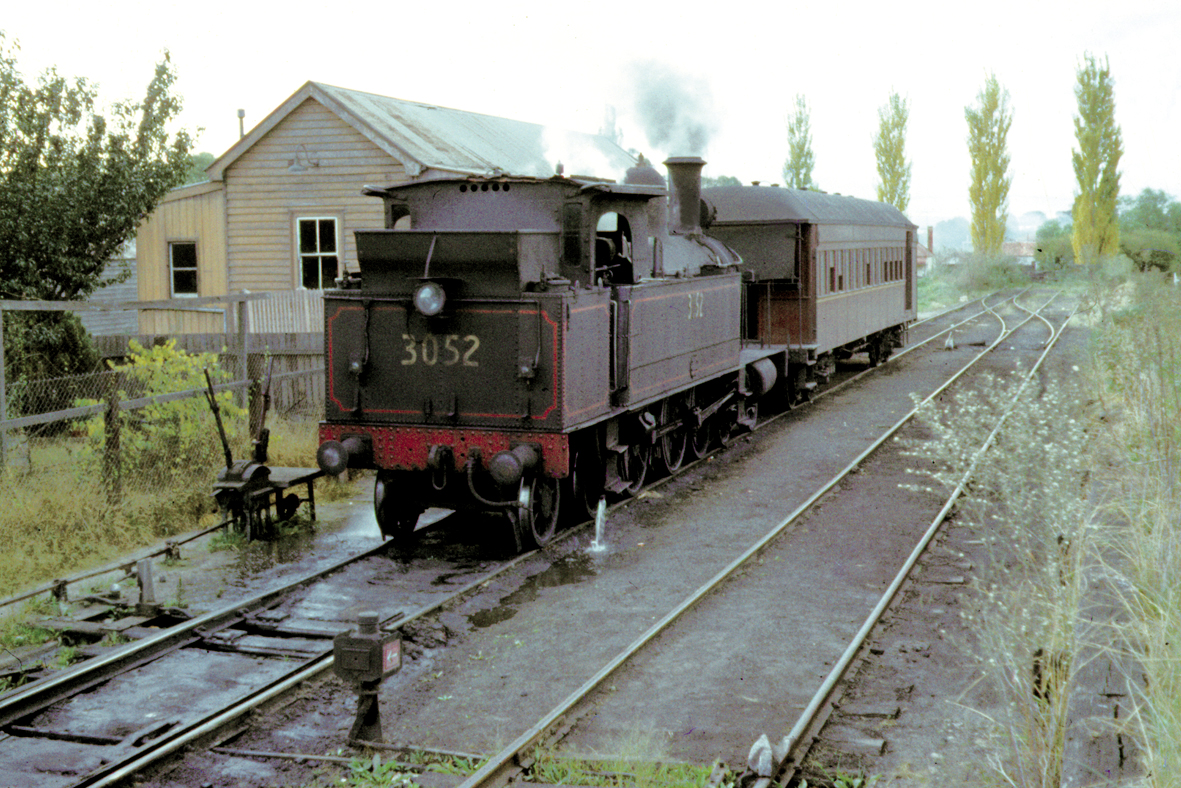 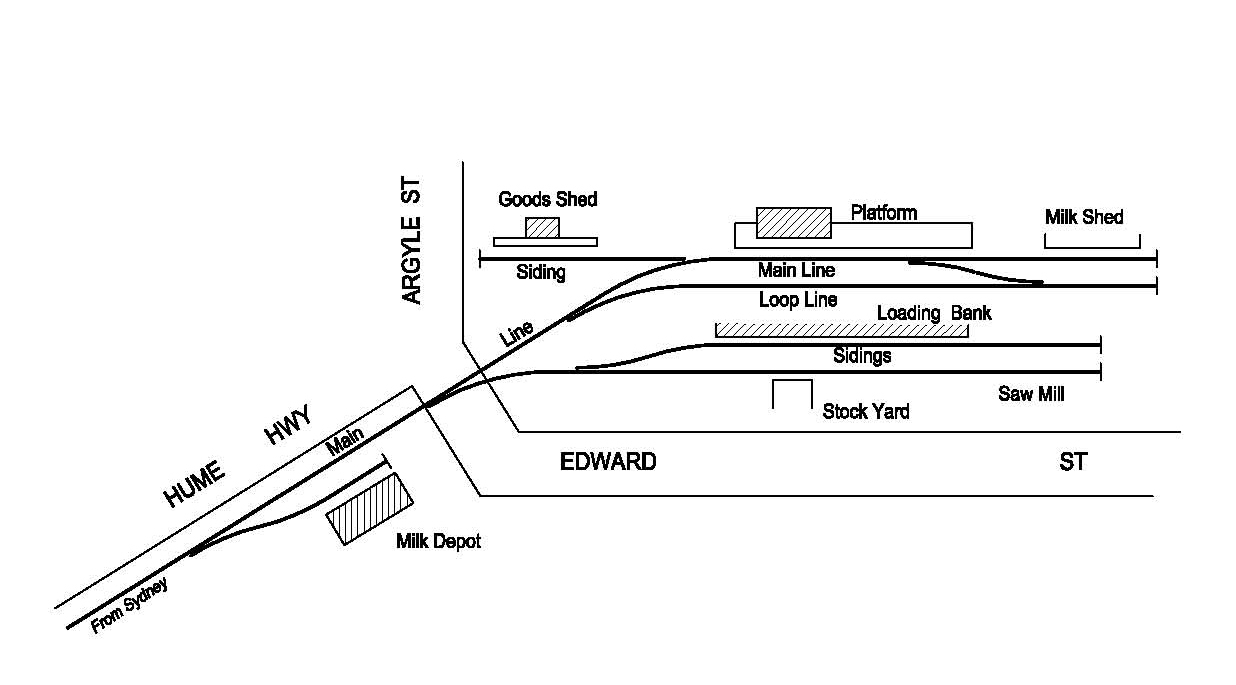 A Short History of the Camden Branch

The Camden tramway was built between 1881 and 1882. It started at Campbelltown on the main Southern line and wandered across the farmland to Camden. Although called a tramway it ran on its own right of way and light track was used. There were only two major stations on the line – Narellan and Camden. The other locations – Maryfields (Rudd's Gate), Kenny Hill, Curran's Hill, Graham's Hill, Kirkham Lane and Elderslie – were, at best, halts which passengers needed to notify the train guard if they wanted to alight.
The first service operated on 10 March 1882. Services were sparse with trains leaving Camden at 6.20am, 9.00am and 2.45pm. Trains returned from Campbelltown at 8.00am, 11.25am and 7.15pm. 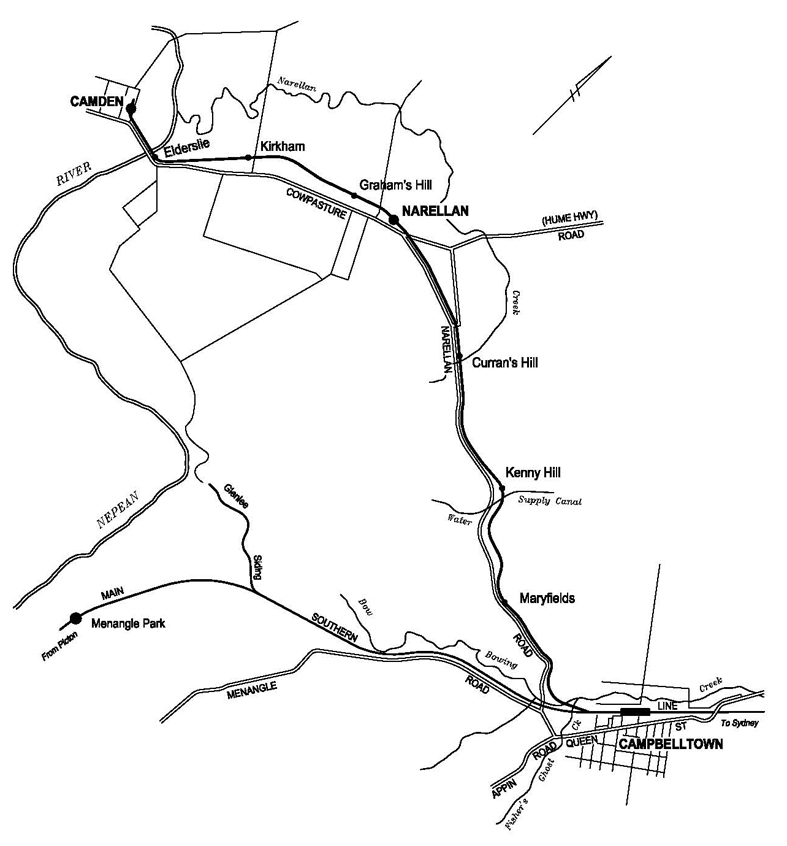 A variety of goods wagons were used on the Camden branch, usually with a HG guards van bringing up the rear.
During the last few years of the branch, the 30 class 4-6-4 tank locomotives took over and saw service until the end on 31 December 1962.
Diesels never made it Camden but they were used as far as Narellan. The 79 class was used once on a trial run with a coal train but returned to Central to spend the rest of their lives shunting passenger trains. The 41 class diesels were used on coal haulage between Narellan and the main Southern line at Campbelltown.
For a more detailed history on the line, refer to Byways of Steam 21 available from Eveleigh Press at www.australianmodelrailways.com
In the next post I will show some of the buildings at Camden and the models I have made.
Posted by Unknown at 18:29 2 comments:

This is the story of my model railway which is based on the Campbelltown-Camden branch which closed in 1962.
I am modelling just the Camden end of the line at the moment but would like to add Narellan to the layout in the furute. The layout is a simple L shape with Camden station and yard on one leg and a storage/fiddle yard on the other.
The station building and cream shed were scratchbuilt and the men's toilet is under construction right now.
The unique goods shed was also scratchbuilt and looks the part.
These buildings were built from photographs with measurements calculated from objects whose measurements were know.
The milk depot was built from Walthers construction parts and is a good representation of the original building.
Locomotives are a bit of a mix at the moment. There is a Sentinel whitemetal 20 class which will be replaced by two Austrains 20 class which will be available later in 2013. A 79 class sometimes visits Camden from Narellan to shunt its coal wagons for the return to Campbelltown. Other locos filling the roster at the moment are a 40 class and a 44 class.
A CPH railmotor provides some of the passenger services and a 600/700 class also assists. The 600/700 class will probably be reomved when the 20 class locomotives arrive.
Rolling stock consists of two FO cars each coupled to a CCA car which provide passenger services. There is a range of goods wagons including CV, MV, PV, S wagons and CH gaurds van.
I hope you enjoy the story of my layout.
In a future blog I will record a little bit of the prototype history of the Camden branch. I will also publishe some photos recording the progress of the layout.
Posted by Unknown at 18:35 2 comments: